If you dont stand for something, you will fall for anything
"Saving just one dog won't change the world, but
it surely will change the world for that one dog."
Edmund Burke

Well I finally got a photo of Jaffa doing his meerkat (or meerkitty as we call it!) impression, and I just have to share as it's soooooo cute!!! Well I think so

He does this when he hears a noise up on the couch or somewhere where he can't quite see, so when he's in a sitting position, he will sit back on his back legs as normal, but his front legs will just hang down like a meerkat's!

That is so cute Squidge.

We took Moni in to get Spade yesterday and were told to keep her as quiet as possible. Ha ha ha yeah right.

True to form she didn't settle down, mainly cause she hates the plastic neck collar she has to wear for the next 10 days. So much so she was throwing herself on the floor and trying to use her front and back legs to get it off. Great for her stitches I think not.

But that is Moni..... she's always so full on and very very cheeky. She managed to settle a bit more today with the collar and I managed to get a shot of her before in a quiet moment. Couldn't resist. So here is our gorgeous little girl, she's 8 months old now. Growing up fast.

Here's hoping the next 9 days go quickly before we get to take her plastic collar off.

That is so cute Squidge.

This has to be the cutest thing ever!
He's in centinnel position!!!! SO CUTE

LOL! Apparently it's a SF thing to do

We spoke to another couple who had one and they said theirs does the same thing! Also, this link has one of the cutest red SF kittens, and he's doing the meerkitty!

Oh Squidge! No way! That is so hilarious! And what a beautiful kitty you have too!
My favourite webcat is Maru, another SF. They must have their hips set quite differently to other cats, allowing them that sort of flexibility (as demonstrated by this pic: 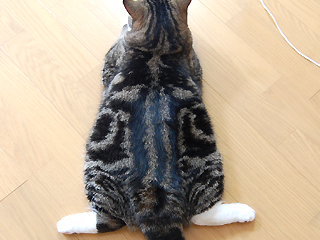 QUOTE
And what a beautiful kitty you have too!
Thanks! He is always making us laugh with his cute antics. I reckon you're right about their hips or something being different to other cats, as he sits/lies in the oddest positions at times! Another of his favourite positions is "the belly", where he shows off his cute little tum!

Another position he does, and it looks really uncomfortable, is "the slouch"

Maru is a really pretty cat! I love his markings, and that youtube vid of him and the box with the hole is so cute!

Hi, I've been wanting to put up some pictures of my furbabies for awhile.
I am hoping I have figured out Photobucket.

I'll see if that works and then tell you about my kitties!

Here are my two burmese cats, Molly is the grey one and Milo is the brown one. They are brother and sister and are 2 years old.

Maudie and Carrie, your furbabies are gorgeous.

Carrie your two look so cute laying all over each other. You can tell they are related too, they are so alike.

Oh Carrie, what a lovely photo!

The dark cat in the photo (his name is Hoighty - like hoighty toight) is part Burmese. His mum was a naughty Burmese who had relations with a neighbourhood tom. Hoighty and his borthers and sisters were surrendered at the Lort Smith Animal Hospital. He has a lot of Burmese characterisitcs (fetches, comes when we call him - he is the dog of the cat world!). He is 3 this year. Best $60 we ever spent!

The torti girl is a very sad story. But I am glad she's ours. Just over six months ago (Black Saturday to be exact) I was having a dinner party for my birthday. It was a terrible afternoon- one guest went to take care of a friends baby while the friend defended her house. Dad went home in tears because his friend from work had lost his house. We were playing with Hoighty thankful for not being in harms way ourselves when we heard this sickening cats cry. I thought Hoighty had jumped out the window (he is 100% indoors) when this tiny malnourished skeleton of a cat jumped on our back deck. She was just bones (I cried so hard for her that night - I honestly thought she was going to die). She would NOT leave, We gave her food and water, she ate and drank like you'd never believe. Anyway, she was making so much fuss I though we have to bring her inside and let her sleep in the bathroom (away from Hoighty). I grabbed a blanket ready for a stray cat to freak out when she was picked up - but she just melted inot my arms and started to purr

. The next day, Sunday we took her to the local vet, had her checked out and tested for feline AIDS (turns out she was about 6 months old, but looked like a 3 months old, AND had a broken tail

). We had her fixed, vaccinated and wormed and took her home. She stayed in isolation in the bathroom for about a month with Hoighty visiting evryday second day, then every day and for longer periods.

We won't really know what happened to her but a few things make me believe she wasn't just a street stray - I think she did live with humans. She loves children (especially girls), she was as beautiful and white as you see in the picture - we live in a new area with lots of dirt, but her paws were white as snow. I never tap the side of the can to indicate food time (we have a song -

but that's a different post!). One day I tapped the side of tha cat to get food off the fork and she came running, like it was a sound she was used to hearing. Oh, and the broken tail I think was someone closing a door on her - she hangs around so much it could easliy happen. Thing is they didn't take her to the vet when she obviously would have been in pain - healed crooked.

Anyway, like I said I am glad she is ours now and the get along so well with each other. When one has to leave the house for whatever reason the other wonders around crying for them. They share a food bowl, water bowl and litter. They now both sleep in the laundry and are very happy kitties.

So this is how it's done!

Just wanted to share some pics of my boys. This is what goes on every weekend during shedding season! These were taken today, right down the back of our block.

Ahh, they're not that big! Photobucket is playing funny buggers.

Sometimes in an ordinary life, love gives us a fairytale...

LOL at all the fluff

Plus they make it worse by taking swipes at each other and pulling out pawfuls of fur.

I've just read through all 25 pages of this thread and it has me so excited! Our first ever pet, Zoe, a 13 week old Cairn Terrier, is flighing in from Victoria on Wednesday. I've hardly slept all week from excitement. I feel like a child waiting for Christmas!!